We continue with the spring being a time of the witches’ activity according to the Slavic tradition. In Herzegovina, trying to protect their homes, people would put thorns of blackthorn or hawthorn on the gate with eggshells hooked on them. In Bosnia, in the evening, an old opanok (bast shoe) was placed in the fireplace, as people believed that its smell would ward off witches (veshtitsa). They also stuck a knife in the door, hung garlic and burned eggshells so that “veshtitsa would not come”. It was forbidden to leave whole eggshells out of fear that veshtitsas would ride in them, like in boats, quickly reaching the places where they want to do evil.
ꏍ
During Maslenitsa, people were trying to identify veshtitsa by burning a special thread, which was used for an “egg biting” ritual (“lamkan” – a ritual similar to the Ukrainian “biting kalita”). For example, in Bulgaria in the Rhodope Mountains, when the thread was burned, the names of women suspected of witchcraft were pronounced: the woman on whose name the thread flashed brightest was considered a witch.
ꏍ
In Polish Pomerania, during Maslenitsa period, fishermen were protecting the fishnet by fumigating it with smoke and shooting at it, otherwise the witches could spoil the catch. The most radical ritual was the symbolic “burning of veshtitsas” in Serbia and Macedonia, similar to the West Slavic and Polessie region rites of ” witch burning” in Kupala bonfires or in bonfires on Walpurgis night. For example, a large branch of a sweet cherry tied with straw, which was lit and carried around orchards, was called “kara veshtitsa” (black witch).
ꏍ
Source: Agapkina T. A. “Mythopoetic foundations of the Slavic folk calendar. Spring-summer cycle. “, 2002 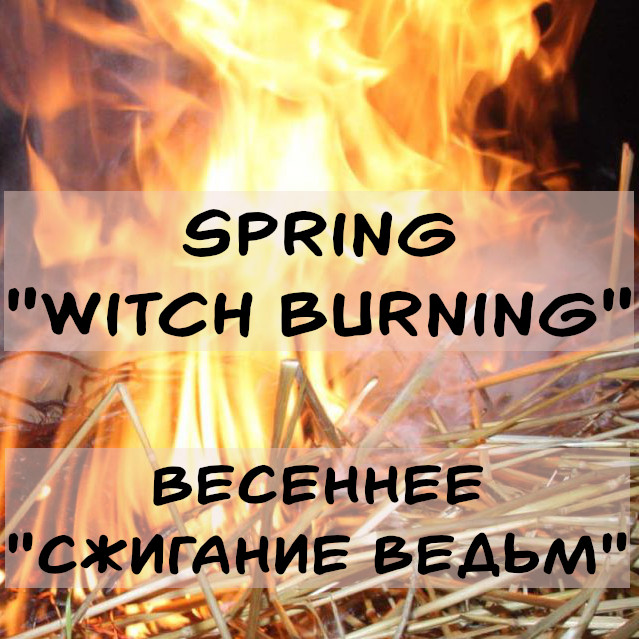