This character arrived into our story from a large Slavic center of trade – a town on a shore of the modern Baltic sea. It was a meeting place for seafarers, pirates, fishermen, merchants and craftspeople. Can you guess the name of that town located on the intersection of important trade routes? 😉

We continue to work on the first story from the animated fantasy comic book series about the life, customs and beliefs of the Slavic tribes in the early Middle Ages. 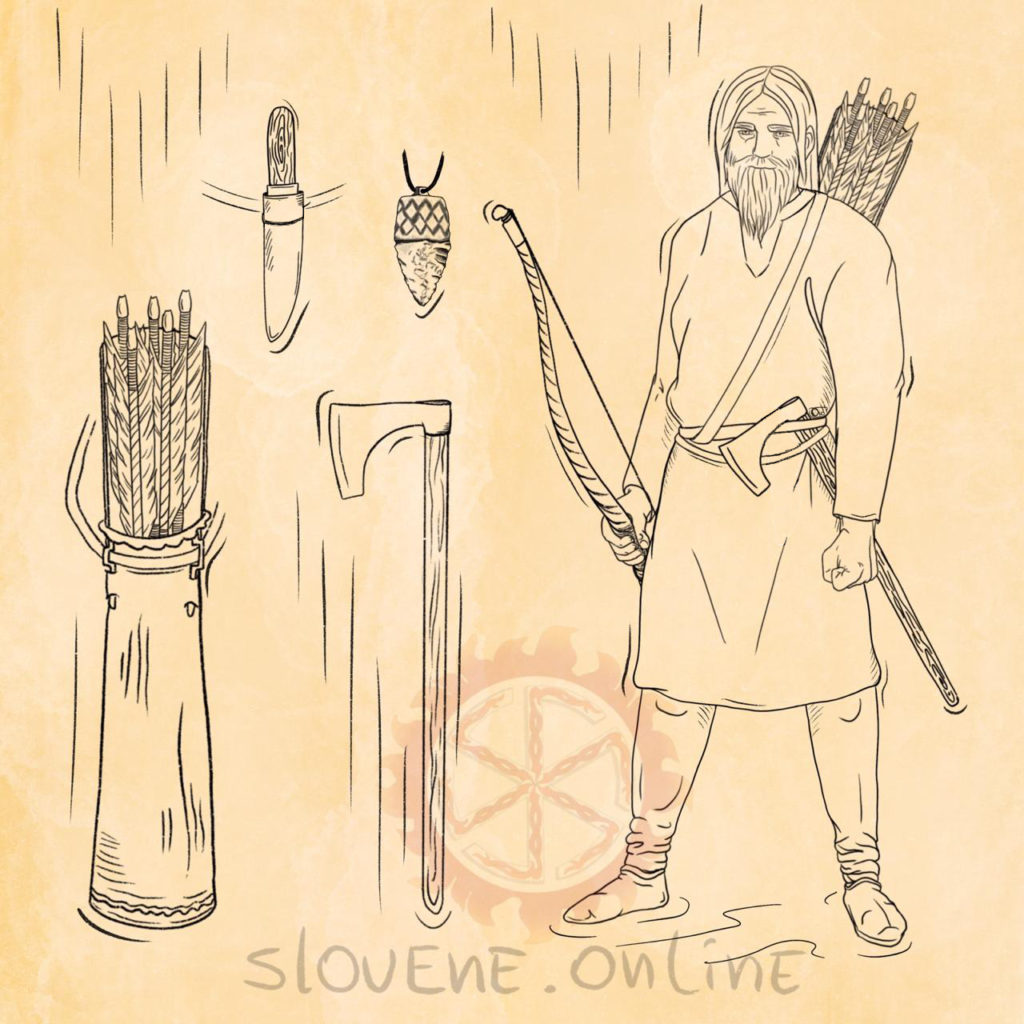 What methods of releasing the arrow from the bow were used by ancient Slavs? What do you think?

In 1887, the work of the Russian researcher D. Anuchin was published, who, with reference to the previously published book by the American researcher E. Morse, conducted an analysis of ancient Russian sources. The picture shows some of the arrow release methods described in the book published in the United States, which were used by Anuchin. In addition, he studied images in manuscripts, on frescoes, even the famous Scythian gold plaque with two archers, but it was difficult to come to definite conclusion, since even sources sometimes contradicted each other.

Most likely, there were different ways of arrow release in use, because in addition to the composite bows with great tension, which we wrote about earlier, some Western Slavs also had simple solid-wood bows made from ash-tree branches (Niederle wrote about this in his famous work “Slovanské starožitnosti”). Probably, most frequent methods were the so-called “Mongolian” (bottom left) and “Mediterranean” (bottom right), as well as a method of pulling the bowstring with the middle, ring and little fingers, in which the index finger and the thumb supported the arrow. 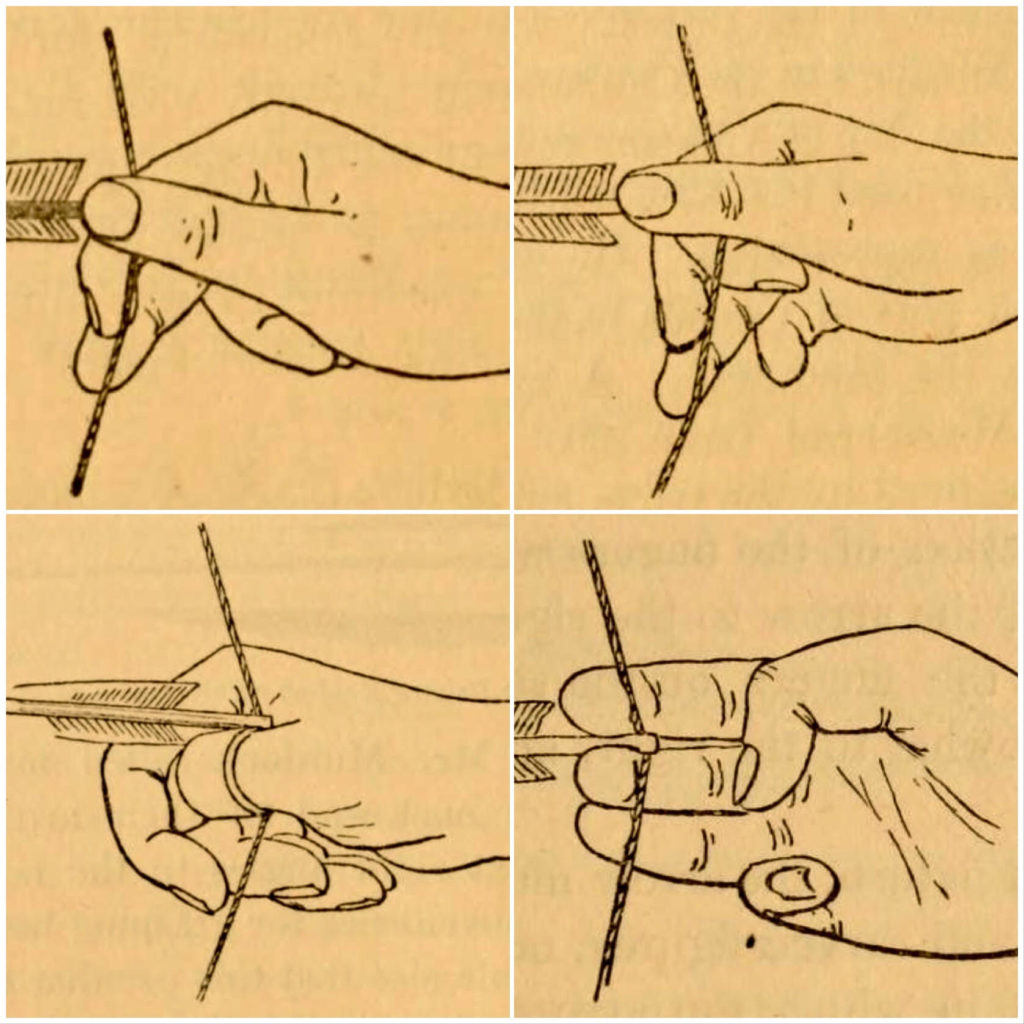 The ancient Slavs called the case for arrows the “tul”, and the masters who made them the “tulniki”. Most often, these cases had a cylindrical shape and were made of birch bark, wood and leather. Usually their length was 60-70 cm, and the diameter at the bottom was 12-15 cm. Arrows were stored with the arrowheads down, and to prevent fletching from crumpling, an expansion was made at the top of the quiver.

The arrow shafts near the fletching were almost always painted in different colors depending on the purpose of the arrowhead, so that an archer could quickly get the right arrow in the appropriate situation.

The shape and purpose of the iron tips of the Slavic arrows were very diverse, but depending on the way of mounting it on the shaft they are divided into two types: see the picture. The right type was most commonly used by the Eastern Slavs, while the left type was more widely spread amongst the Western Slavs. 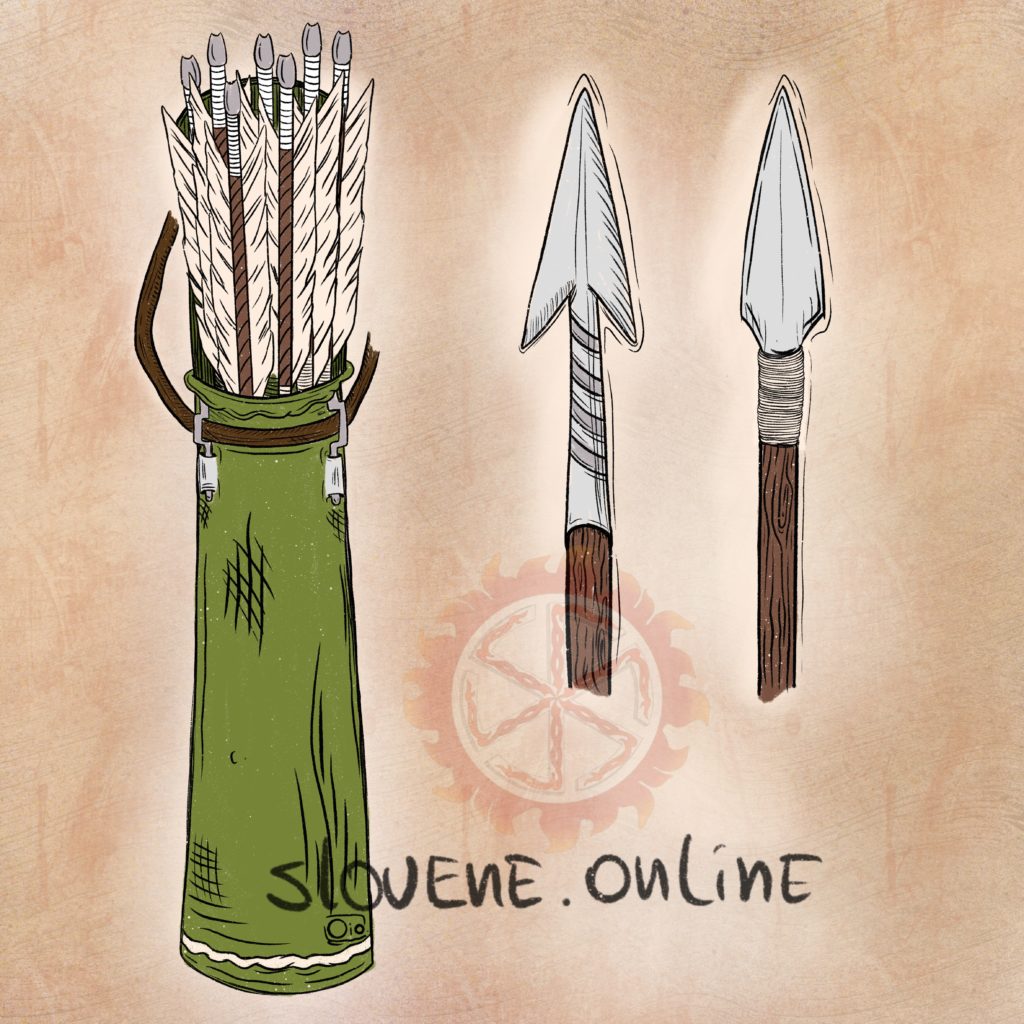 Our Slavic ancestors used composite bows for hunting and warfare, which with a bowstring attached resembled a smoothed “M” letter. Archeologists associate the appearance of composite bows with Scythians in the 1st millennium BC, after which these bows quickly spread throughout Eastern Europe and were used until the late Middle Ages. The lethal force of the Slavic composite bows was enormous – for example, an arrow fired from them could pierce an armor of the German knights, which was recorded in historical documents. The tension force of such bows (40-80 kg) was twice and four times more than that of their ancient counterparts from Western Europe, as well as modern sports bows.

Composite bows, as in this image, were glued from two types of wood (for example, juniper and birch), strengthened by tendons (elk, deer, etc.) and glued over with birch bark using special fish glue. The handle and ends of the bow often had bone plates lining.

The bowstring for such powerful bows also had special requirements. It had to be strong, do not stretch, swell or shrink in any weather conditions. Therefore, they were usually made by combining various materials – for example, from a twisted rawhide leather with a twist of silk or hemp threads.

Until the XVII century, bow and arrow had significant advantages over handheld firearms. For example, a good archer could fire up to 12 arrows per minute, while firearms did not yet have such rate of fire. 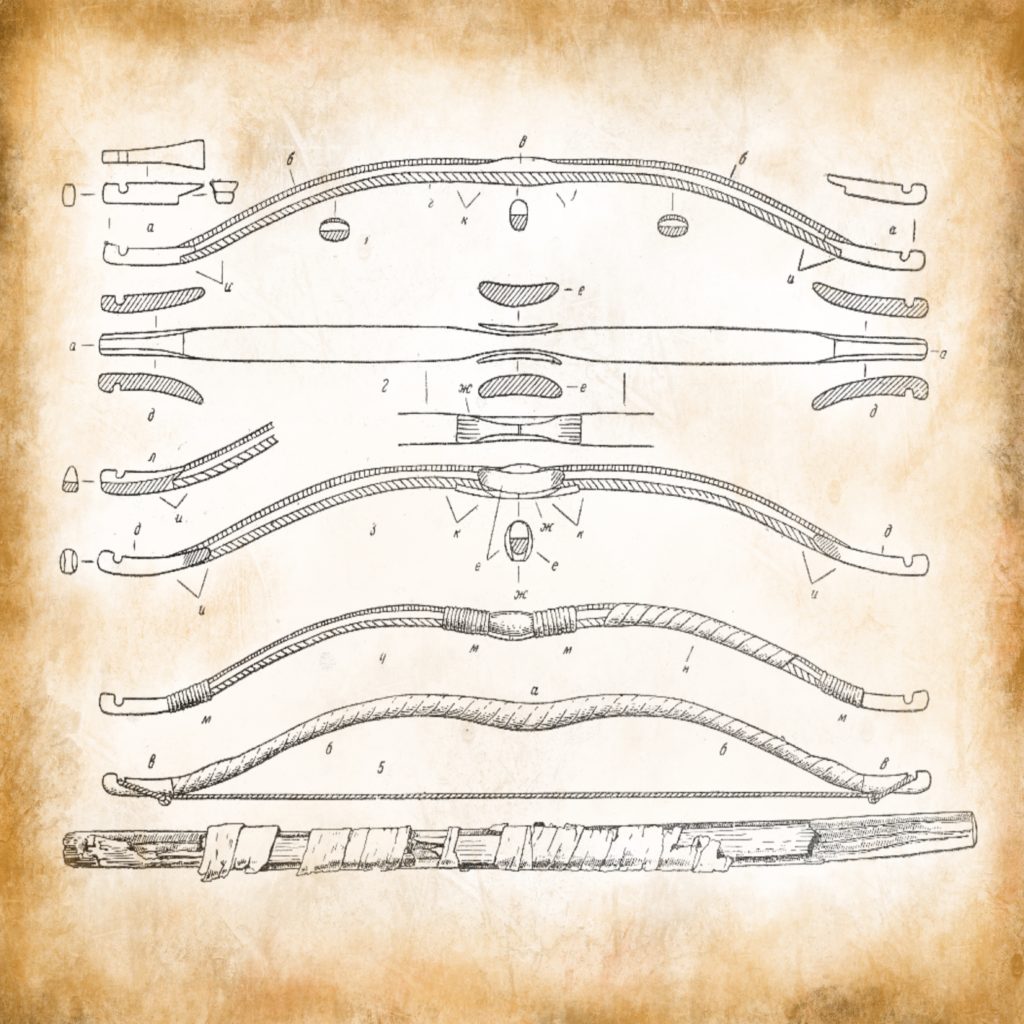 Today we are introducing another character from a series of stories about life of Slavic people in the Early Medieval times. His tribe lived in the interfluve of Warta and Noteć rivers. Any ideas how it was called? 😉 Hint: this tribe became a foundation of a later Polish nation and gave it its name. 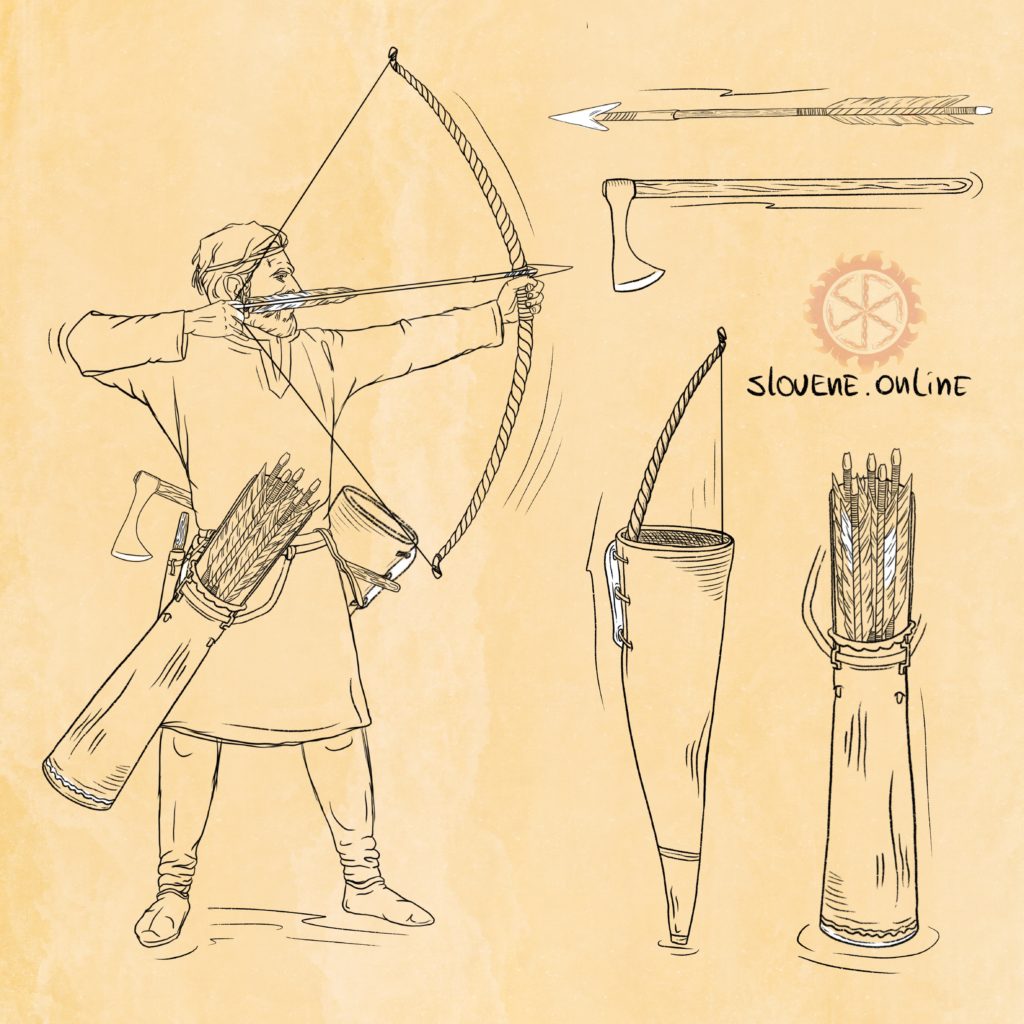